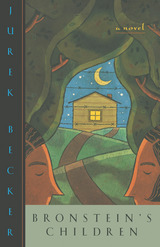 Bronstein's Children
by Jurek Becker
translated by Leila Vennewitz
University of Chicago Press, 1999
Paper: 978-0-226-04127-8
"East Berlin, 1973: an 18-year-old Jew discovers that his father's friends are holding prisoner a former Nazi concentration camp guard in the family cottage. The three older men have handcuffed the ex-Nazi to the bed and are interrogating and torturing him in an attempt to get him to admit to his war crimes. . . . Becker keenly shows the tension between members of the Holocaust generation and their children, who are unable to understand the complexity of that nightmarish era of human history."—Booklist

"[A] chilly, disquieting novel about historical slippage; about the seemingly inevitable decline of horror into a vague and generic recollection. The East German writer has devised something between story and allegory to evoke the cold generational millennium that separates a father, with his concentration-camp memories, from a son, adrift in a society with no memories whatsoever."—Richard Eder, Los Angeles Times Book Review

"Mr. Becker, writing simply and clearly in an unstrained narrative, speaks with the voice of knowledge, and we do well to listen to him."—Eva Figes, New York Times Book Review