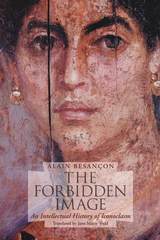 Philosophers and theologians have long engaged in intense debate and introspection over the representation of the deity, its possibilities and its proscriptions. The Forbidden Image traces the dual strains of “iconophilia” and iconoclasm, the privileging and prohibition of religious images, over a span of two and a half millennia in the West.

Alain Besançon’s work begins with a comprehensive examination of the status of the image in Greek, Judaic, Islamic, and Christian thought. The author then addresses arguments regarding the moral authority of the image in European Christianity from the medieval through the early modern periods. Besançon completes The Forbidden Image with an examination of how iconophilia and iconoclasm have been debated in the modern period.

“Even the reader who has heard something of the Byzantine quarrels about images and their theological background will be surprised by a learned and convincing interpretation of the works of Mondrian, Kandinsky, and Malevich in terms of religiously inspired iconoclasm. . . . This is an immensely rich and powerful masterpiece.”—Leszek Kolakowski, Times Literary Supplement

Alain Besançon is the director of studies at L'École des Hautes Études en Sciences Sociales. A specialist in Russian politics and intellectual history, he has written a number of books, including Anatomie d'un spectre and Les origines intellectuelles du léninisme.


Introduction
Part One Iconoclasm: The Ancient Cycle
Chapter One The Philosophical Critique of the Image
1 Preliminaries: "Civil Theology"
2 Early Philosophy
3 Late Philosophy
4 The Persistence of the Pagan Image
Chapter Two The Biblical Prohibition
1 The Prohibition of the Torah
2 The Jewish and Muslim Interpretations
3 In the Image and Likeness
4 The Image of God: Four Church Fathers
Chapter Three The Image in Dispute
1 The Production of Christian Images
2 The Icon and Dogma
3 Iconoclasm: Pro et Contra
4 The Icon
Part Two Pax Romana of the Image
Chapter Four The Middle Ages
1 The Letter to Serenus
2 The Carolini Libri
3 Relics
4 Bernard and Dionysius
5 Bonaventura
6 Thomas Aquinas
Chapter Five The Renaissance and the Baroque Period
1 The Affirmation of Art and of the Artist
2 The Support of Ancient Gods
3 Around Trent
4 The Crescentia Affair
5 The Image in Celebration
Part Three Iconoclasm: The Modern Cycle
Chapter Six The New Theology of the Image
1 Three Iconoclasts
2 Hegel: Nostalgia for the Image
Chapter Seven The New Theology at Work
1 The French Exception in the Nineteenth Century
2 Nineteenth-Century Religious Art
3 Symbolist Religiosity
Chapter Eight The Russian Revolution
1 Russia's Aesthetic Education
2 The Spiritual: Kandinsky
3 The Supreme: Malevich
Postscript
Conclusion
Notes
Index