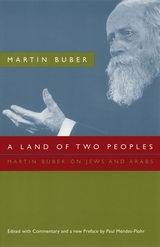 A Land of Two Peoples: Martin Buber on Jews and Arabs
by Martin Buber
edited by Paul Mendes-Flohr
University of Chicago Press, 2005
Paper: 978-0-226-07802-1
Theologian, philosopher, and political radical, Martin Buber (1878–1965) was actively committed to a fundamental economic and political reconstruction of society as well as the pursuit of international peace. In his voluminous writings on Arab-Jewish relations in Palestine, Buber united his religious and philosophical teachings with his politics, which he felt were essential to a life of public dialogue and service to God.

Collected in ALand of Two Peoples are the private and open letters, addresses, and essays in which Buber advocated binationalism as a solution to the conflict in the Middle East. A committed Zionist, Buber steadfastly articulated the moral necessity for reconciliation and accommodation between the Arabs and Jews. From the Balfour Declaration of November 1917 to his death in 1965, he campaigned passionately for a "one state solution.

With the Middle East embroiled in religious and ethnic chaos, A Land of Two Peoples remains as relevant today as it was when it was first published more than twenty years ago. This timely reprint, which includes a new preface by Paul Mendes-Flohr, offers context and depth to current affairs and will be welcomed by those interested in Middle Eastern studies and political theory.
AUTHOR BIOGRAPHY
Martin Buber was professor at the Hebrew University of Jerusalem where he taught courses in anthropology, sociology, philosophy, and Hasidic and biblical studies. He is best known for his book I and Thou. Paul Mendes-Flohr is professor of Jewish studies at the Hebrew University of Jerusalem and professor of modern Jewish thought in the Divinity School, the Department of History, and the Committee on Jewish Studies at the University of Chicago.
TABLE OF CONTENTS