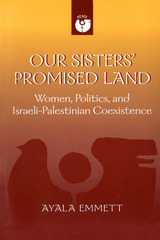 In this powerful and timely book, Ayala H. Emmett examines the political roles of women in the Israeli-Palestinian peace process. Emmett's insights come from numerous trips to the region that included in-depth interviews with many of the participants. Excerpts from the interviews give voice to the women who played vitally important yet often overlooked roles in the political transformations of the contemporary Middle East. Emmett's observations on women's actions in political venues have global implications, transcending the specific political and social contexts of the region and shedding light on both the strengths of female activism and the resistances of male political institutions.
Emmett investigates the successes and failures of women in the Israeli political landscape, particularly the harassment experienced during the leadership of Right and ultra-Right groups before the ascension to office of the late Prime Minister Yitzhak Rabin. Her account of women's activism in Israel provides a rich backdrop for viewing the compelling events that have taken place in the Middle East throughout the 1990s and offer insights into the future of women's political activism, both in the ever-changing Israeli political climate and in the broader world of women in politics.
"Brilliant in conception and theory, based on superb fieldwork, and clearly written for both specialist and non-specialist reader." --Maurie Sacks, Montclair State University
"A groundbreaking study. . . .Ayala Emmett brings an unusual voice of clarity into the muddled politics of the Middle East. Where most studies ignore or marginalize women's role in the peace process, Emmett highlights women as political actors and shows their capacity to bridge the chasm between two hostile peoples." --Cynthia Saltzman, Rutgers University, Camden
Ayala Emmett is Associate Professor of Anthropology, University of Rochester.
TABLE OF CONTENTS
Contents
Introduction
1. Citizens of the State and Political Women
2. On the Borders of Nations: Sororal Transnational Territory
3. A Socialist God of Justice: Between Fundamentalism and the Secular Left
4. East Confronts West: What the Left Eye of Israel Does Not See
5. A Political Upheaval: Meanings of Peace and Coexistence
6. When Locals Meet the Global
Conclusion: The Margins Illuminating Politics
Notes
Bibliography
Glossary of Hebrew Terms
Index
REQUEST ACCESSIBLE FILE