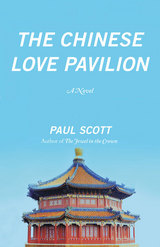 Paul Scott is most famous for his much-beloved tetralogy The Raj Quartet, an epic that chronicles the end of the British rule in India with a cast of vividly and memorably drawn characters. Inspired by Scott’s own time spent in India and Malaya during World War II, this two powerful novel provides valuable insight into how foreign lands changed the British who worked and fought in them, hated and loved them.
The Chinese Love Pavilion follows a young British clerk, Tom Brent, who must track down a former friend—now suspected of murder—in Malaya. Tom faces great danger, both from the mysterious Malayan jungles and the political tensions between British officers, but the novel is perhaps most memorable for the strange, beautiful romance between Tom and a protean Eurasian beauty whom he meets in the eponymous Chinese Love Pavilion.

AUTHOR BIOGRAPHY
Paul Scott (1920–78) was a British novelist best known for his series The Raj Quartet, which begins with The Jewel in the Crown and is also published by the University of Chicago Press.

REVIEWS
“One has to admire Mr. Scott’s gifts as a buttonholing storyteller, and his rich, close-textured prose; his descriptions of action and of certain kinds of relationships are superb.”

“One of the best English novels of its decade.”