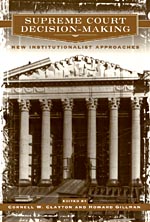 What influences decisions of the U.S. Supreme Court? For decades social scientists focused on the ideology of individual justices. Supreme Court Decision Making moves beyond this focus by exploring how justices are influenced by the distinctive features of courts as institutions and their place in the political system.

Drawing on interpretive-historical institutionalism as well as rational choice theory, a group of leading scholars consider such factors as the influence of jurisprudence, the unique characteristics of supreme courts, the dynamics of coalition building, and the effects of social movements. The volume's distinguished contributors and broad range make it essential reading for those interested either in the Supreme Court or the nature of institutional politics.