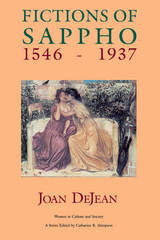 Considering Sappho as a creature of translation and interpretation, a figment whose features have changed with social mores and aesthetics, Joan DeJean constructs a fascinating history of the sexual politics of literary reception. The association of Sappho with female homosexuality has made her a particularly compelling and yet problematic subject of literary speculation; and in the responses of different cultures to the challenge the poet presents, DeJean finds evidence of the standards imposed on female sexuality through the ages. She focuses largely though not exclusively on the French tradition, where the Sapphic presence is especially pervasive. Tracing re-creations of Sappho through translation and fiction from the mid-sixteenth century to the period just prior to World War II, DeJean shows how these renderings reflect the fantasies and anxieties of each writer as well as the mentalité of his or her day.
TABLE OF CONTENTS