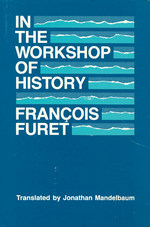 In the Workshop of History
by François Furet
translated by Jonathan Mandelbaum
University of Chicago Press, 1985
Cloth: 978-0-226-27336-5
Those concerned with the practice of history as a discipline and as an intellectual activity will be intrigued by the view of history that François Furet offers in this collection of essays. After twenty-five years as a professional historian at the Ecole des Hautes Etudes and in the ranks of the Annales school, Furet sets out to reexamine the methodological and intellectual cleavages that exist today among historians.

Furet views history as a field bounded at each end by two ideal types. One end is concerned with the history of periods and with the empiricism of "facts" rather than received ideas. At the other end is problem-oriented history, which substitutes for the supposed coherence of a "period" the analytical examination of a question. Furet's own work leans toward the second, more conceptually oriented kind of historiography. The essays in this volume, most of them never before published in English, illustrate the breadth of his approach. Furet's discussion ranges through Tocqueville's conceptual system to present-day America, from the origins of history in France to the Jewish experience in the late twentieth century. Among Furet's recurrent themes is the contention that the historian constructs the object or field of his research rather than receiving it from the past.
AUTHOR BIOGRAPHY
François Furet, an authority on the French revolution and the eighteenth century, is president of the Ecole des Hautes Etudes en Science Sociales in Paris.
TABLE OF CONTENTS


Introduction
Part One: History Today
1. French Intellectuals: From Marxism to Structuralism
2. Quantitative History
3. From Narrative History to Problem-oriented History
4. History and Ethnology
Part Two: History in Seventeenth- and Eighteenth-Century European Culture
5. The Birth of History in France
6. Book Licensing and Book Production in the Kingdom of France in the Eighteenth Century
7. Two Historical Legitimations of Eighteenth-Century French Society: Mably and Boulainvilliers
8. Civilization and Barbarism in Gibbon's History
Part Three: America and the Idea of Democracy
9. From Savage Man to Historical Man: The American Experience in Eighteenth-Century French Culture
10. The Conceptual System of Democracy in America
11. Today's America: A Metamorphosis of the Idea of Equality
Part Four: Aspects of Modern Jewish History
To the Reader
12. Jews and French Democracy: Some Recent Books
13. Gershom Scholem and Jewish History
14. Israel and the French Left: The Misunderstanding
15. Israel, Zionism, and the Diaspora
Notes
Index