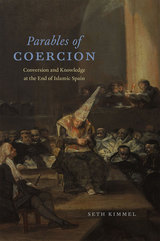 In the sixteenth and seventeenth centuries, competing scholarly communities sought to define a Spain that was, at least officially, entirely Christian, even if many suspected that newer converts from Islam and Judaism were Christian in name only. Unlike previous books on conversion in early modern Spain, however, Parables of Coercion focuses not on the experience of the converts themselves, but rather on how questions surrounding conversion drove religious reform and scholarly innovation.
In its careful examination of how Spanish authors transformed the history of scholarship through debate about forced religious conversion, Parables of Coercion makes us rethink what we mean by tolerance and intolerance, and shows that debates about forced conversion and assimilation were also disputes over the methods and practices that demarcated one scholarly discipline from another.
AUTHOR BIOGRAPHY
Seth Kimmel is assistant professor of Latin American and Iberian cultures at Columbia University. He lives in New York.
REVIEWS
"Parables of Coercion is a fascinating and important work, participating in some of the most crucial conversations now taking place within Jewish and Islamic studies, as well as at the crossroads of Iberian and New World studies. While Kimmel’s book will be read eagerly by specialists in these fields, its impact will stretch far beyond, attracting a readership interested in how we became the kind of people we are today, in terms of religion, secularism, and modernity itself."
— Suzanne Conklin Akbari, University of Toronto

"This thoughtfully argued and innovative book deals with religious coercion and scholarly innovation. Abandoning the well-trodden path that erroneously renders Spanish forms and narratives of religious discipline only comprehensible as religious intolerance, Kimmel explores the relationship between debates about religion on the one hand and the conditions of knowledge production on the other. He focuses on the debates over the relationship between form and content, heresy of the heart and public orthodoxy of the tongue to show that it was not simply a theological or political issue. As Kimmel shows, the breach between public ritual and private faith corresponded to a second and more troubling chasm between word and meaning."
— Mercedes García-Arenal, Centro de Ciencias Humanas y Sociales, Madrid

"Kimmel has written a fascinating study of the learned cultures built out of a century of Spanish Christian intolerance toward Islam, beginning with the coerced conversion of Spain's Muslims to Christianity in the early sixteenth century, to the expulsion of the Moriscos (as the converts and their descendants were called) in the early seventeenth. He shows us how the evolving  'Morisco question' animated the emergence of disciplines such as philology, history, theology, political theory, and economics. In the process, he provides us with an alternate and disquieting history of our own scholarly, political, and religious practices."
— David Nirenberg, University of Chicago

"Parables of Coercion is an ambitious book of great breadth and complexity."
— Journal of Jesuit Studies

"In Parables of Coercion Kimmel succeeds wonderfully in excavating the intersection of early modern Spanish socioreligious and intellectual history and in deciphering its various discourses....Kimmel further uncovers the dialectical relationship between socioreligious discord and innovative cultural production by religious intellectuals in seventeenth-century Spain, and in the process he manages brilliantly to render meaningless the conventional, simplistic characterization of early modern Spain as a purely intolerant society. It was far more complicated during the sixteenth century afterlife of Islamic Spain than historiographical orthodoxy suggests."
— Modern Philology

"Ranging across canon law, sacred philology, and history in sixteenth- and early seventeenth-century Spain, Seth Kimmel aims to demonstrate how the phenomenon of Muslim converts to Christianity was entertained by experts in those disciplines, as well as the ways in which the Morisco question affected the disciplines themselves."
— Renaissance Quarterly

"Seth Kimmel’s compelling study offers an entirely new angle on the Morisco question, one which explores the relationships between coercion and conversion and religious reform and scholarly innovation."
— Journal of Spanish Cultural Studies

"Drawing together both more and less well-known figures and debates in insightful ways, Parables of Coercion vividly demonstrates the variety and range of early modern Spanish intellectual culture and thus offers a genuine contribution to the field."
— Speculum


Introduction: To Join the Banquet