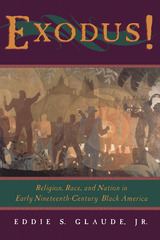 No other story in the Bible has fired the imaginations of African Americans quite like that of Exodus. Its tale of suffering and the journey to redemption offered hope and a sense of possibility to people facing seemingly insurmountable evil.

Exodus! shows how this biblical story inspired a pragmatic tradition of racial advocacy among African Americans in the early nineteenth century—a tradition based not on race but on a moral politics of respectability. Eddie S. Glaude, Jr., begins by comparing the historical uses of Exodus by black and white Americans and the concepts of "nation" it generated. He then traces the roles that Exodus played in the National Negro Convention movement, from its first meeting in 1830 to 1843, when the convention decided—by one vote—against supporting Henry Highland Garnet's call for slave insurrection.

Exodus! reveals the deep historical roots of debates over African-American national identity that continue to rage today. It will engage anyone interested in the story of black nationalism and the promise of African-American religious culture.
AUTHOR BIOGRAPHY
Eddie S. Glaude Jr. is theWilliam S. Tod Professor of Religion and African American Studies at Princeton University. He is the author of In a Shade of Blue: Pragmatism and the Politics of Black America and editor of Is It Nation Time? Contemporary Essays on Black Power and Black Nationalism, both published by the University of Chicago Press.
TABLE OF CONTENTS


Acknowledgements
Part One: Exodus History
1. "Bent Twigs and Broken Backs": An Introduction
2. Of the Black Church and the Making of a Black Public
3. Exodus, Race, and the Politics of Nation
4. Race, Nation, and the Ideology of Chosenness
5. The Nation and Freedom Celebrations
Part Two: Exodus Politics
6. The Initial Years of the Black Convention Movement
7. Respectability and Race, 1835-1842
8. "Pharaoh's on Both Sides of the Blood-Red Waters": Henry Highland Garnet and the National Convention of 1843
Epilogue: The Tragedy of African American Politics
Notes
Index