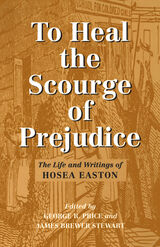 To Heal the Scourge of Prejudice: The Life and Writings of Hosea Easton
by Hosea Easton
edited by George R. Price, James Brewer Stewart, George R. Price and James Brewer Stewart
University of Massachusetts Press, 1999
Paper: 978-1-55849-185-4
How did racial prejudice originate and why has it been so deeply rooted in American culture? What have been the long-term effects of prejudice on the intellectual, communal, and psychological resources of African Americans? How might the nightmare of racial domination be truly brought to an end? Still pertinent today, these were among the key questions addressed more than a century and a half ago by Hosea Easton (1799–1837), an important yet long neglected activist and intellectual. A black minister from New England, Easton rose to prominence during the 1820s and 1830s by joining in the struggle of free African Americans to resist southern slavery and secure racial equality. From this experience he developed a deep understanding of the problem of "race" in the United States and became a trenchant critic of white supremacy and its devastating consequences. This volume brings back into print the only extended writings of Easton that have survived into our time: his insightful, almost prescient A Treatise on the Intellectual Character, and the Civil and Political Condition of the Colored People of the U. States, first published in 1837; and his passionate 1828 Thanksgiving Day "Address." The book also provides a biographical portrait of Easton and his family, drawn from primary documents as well as secondary sources in the areas of biography, genealogy, and social history.
AUTHOR BIOGRAPHY
George R. Price teaches Native American studies at Salish Kootenai College and the University of Montana. James Brewer Stewart is James Wallace Professor of History at Macalaster College.