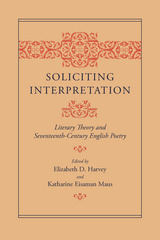 This collection gathers new essays by critics and scholars who are currently reshaping our sense of the function and nature of seventeenth-century poetry. Contributors return to the New Critical canon of Renaissance poetry with fresh perspectives that emphasize considerations of gender, ideology, power, and language.

These essays, accompanied by an extensive editors' introduction, intersect less in their shared enthusiasm for particular authors or interpretative methods than in a common interest in particular critical issues. They present the most exciting work by critics redefining Renaissance studies.
AUTHOR BIOGRAPHY
Elizabeth D. Harvey is assistant professor of English at the University of Western Ontario. Katharine Eisaman Maus, associate professor of English at the University of Virginia, is the author of Ben Jonson and the Roman Frame of Mind.
TABLE OF CONTENTS