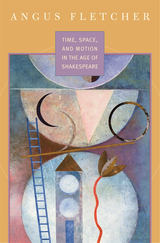 Theirs was a world of exploration and experimentation, of movement and growth--and in this, the thinkers of the Renaissance, poets and scientists alike, followed their countrymen into uncharted territory and unthought space. A book that takes us to the very heart of the enterprise of the Renaissance, this closely focused but far-reaching work by the distinguished scholar Angus Fletcher reveals how early modern science and English poetry were in many ways components of one process: discovering and expressing the secrets of motion, whether in the language of mathematics or verse.

Throughout his book, Fletcher is concerned with one main crisis of knowledge and perception, and indeed cognition generally: the desire to find a correct theory of motion that could only end with Newton's Laws. Beginning with the achievement of Galileo--which changed the world--Time, Space, and Motion identifies the problem of motion as the central cultural issue of the time, pursued through the poetry of the age, from Marlowe and Shakespeare to Ben Jonson and Milton, negotiated through the limits and the limitless possibilities of language much as it was through the constraints of the physical world.
TABLE OF CONTENTS
Introduction
1 Galileo’s Metaphor
2 The Theme of Motion
3 On Drama, Poetry, and Movement
4 Marlowe Invents the Deadline
5 The Defense of the Interim
6 Structure of an Epitaph
7 Donne’s Apocryphal Wit
8 Milton and the Moons of Jupiter
Conclusion
Notes
Acknowledgments
Index