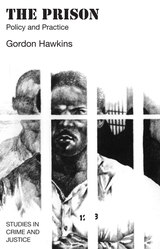 Despite lethal explosions of violence from within and critical assaults from without, it seems certain that prisons will continue to exist for the foreseeable future. Gordon Hawkins argues that certain key issues which attend the use of imprisonment as a penal method must be dealt with realistically. Beginning with a discussion of the ideology of imprisonment and the principal lines of criticism directed at it, Hawkins examines such issues as the prisonization hypothesis (the theory that prisons serve as a training ground for criminals), the role of the prison guard, work in prisons, and the use of prisoners as research subjects for medical experiments. He also deals with the prisoners' rights movement and its implications for the future of prison administration. Hawkins not only makes specific recommendations for reform, he also carefully appraises the barriers which obstruct their implementation.

"Hawkins devotes a large portion of this relatively short book to a discussion of some of the really crucial policy activities that tend to stifle meaningful reform and then goes on to tell how at least some of these policies can be altered. . . . The book concludes with a chapter devoted to a discussion of impediments to change that should be required reading for all serious students of penology."—Choice

"Hawkins has added a much needed down-to-earch analysis of prison. . . . This is not a pessimistic book. It is a realistic book. It avoids the pitfall of utopian and single-factor solutions to an extremely complex problem."—Graeme R. Newman, Annals of the American Academy of Political and Social Science
AUTHOR BIOGRAPHY
Gordon Hawkins served as Prison Governor in the United Kingdom Prison System and as an Assistant Principal in the United Kingdom's Staff College. He is an associate professor of Criminology at the University of Sydney and a Fellow in the Center for Studies in Criminal Justice at the University of Chicago. He is the author of numerous works, including (with Norval Morris) The Honest Politician's Guide to Crime Control and Letter to the President on Crime Control and (with Franklin E. Zimring) Deterrence: The Legal Threat to Crime Control, all published by the University of Chicago Press.
TABLE OF CONTENTS


Preface
1. The Prison and Its Critics
2. The Principal Issues
3. The Effects of Imprisonment
4. The Other Prisoners
5. "Neither Slavery Nor Involuntary Servitude"
6. The Rights of the Prisoner
7. Impediments to Change
Selected Reading and References
Index