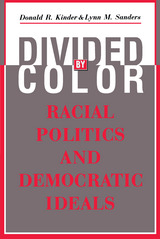 When news of the O. J. Simpson verdict swept across the United States, a nation stood divided as blacks and whites reacted differently to the decision. Seldom has the racial division that permeates our society come so clearly and prominently into view.

Divided by Color supplies the reasons for this division, asserting that racial resentment continues to exist. Despite a parade of recent books optimistically touting the demise of racial hostility in the United States, the authors marshal a wealth of the most current and comprehensive evidence available to prove their case. Kinder and Sanders reveal that racial resentment remains the most powerful determinant of white opinion on such racially charged issues as welfare, affirmative action, school desegregation, and the plight of the inner city.

But more than a comprehensive description of American views on race, Divided by Color seeks to explain just why black and white Americans believe what they do. Kinder and Sanders analyze the critical factors that shape people's opinion on race-related issues, uncovering the relative importance of self-interest, group identity, ideological principles, as well as racial animosity. Finally, the authors explore how the racial divide has insinuated itself into the presidential election process and examine the role of political elites in framing racial issues for ordinary citizens.

The most accurate and thorough analysis of American attitudes toward race and racial policies undertaken in decades, Divided by Color is destined to become a landmark work on race in America.
TABLE OF CONTENTS


Acknowledgments
1: Race and Democratic Aspirations in America
2: The Racial Divide in Public Opinion
3: No Single Sovereign Theory Will Do: Multiple Interpretations of Public Opinion on Race
4: Threat and Advantage
5: Subtle Prejudice for Modern Times
6: Matters of Principle
7: Framing the Issue: Elite Discourse and Public Understanding
8: The Electoral Temptations of Race
9: Benign Neglect and Racial Codewords in the 1988 Presidential Campaign
10: Racial Politics and Democratic Ideals
Appendix A: More on the Meaning and Measurement of Prejudice
Appendix B: Specifications and Results
Notes
References
Index