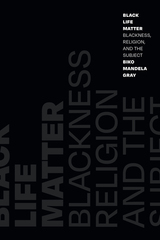 In Black Life Matter, Biko Mandela Gray offers a philosophical eulogy for Aiyana Stanley-Jones, Tamir Rice, Alton Sterling, and Sandra Bland that attests to their irreducible significance in the face of unremitting police brutality. Gray employs a theoretical method he calls “sitting-with”—a philosophical practice of care that seeks to defend the dead and the living. He shows that the police who killed Stanley-Jones and Rice reduced them to their bodies in ways that turn black lives into tools that the state uses to justify its violence and existence. He outlines how Bland’s arrest and death reveal the affective resonances of blackness, and he contends that Sterling’s physical movement and speech before he was killed point to black flesh as unruly living matter that exceeds the constraints of the black body. These four black lives, Gray demonstrates, were more than the brutal violence enacted against them; they speak to a mode of life that cannot be fully captured by the brutal logics of antiblackness.
AUTHOR BIOGRAPHY
Biko Mandela Gray is Assistant Professor of Religion at Syracuse University and coeditor of The Religion of White Rage: White Workers, Religious Fervor, and the Myth of Black Racial Progress.
REVIEWS

“[Black Life Matter] is an incredible work examining the lost lives of four key figures in thepost-modern Civil Rights Movement, also known as Black Lives Matter. . . . Mandela Gray does an amazing job at demonstrating, and never forgetting, the recent atrocities and injustices of our culture.”

“Black Life Matter is a wonderful book that explores the meaning of Black bodies and their corporality as living matter. . . . This book works as an instrument to mourn, honour, and actively remember not only the lives and death of the four victims described in each of the chapters but any other Black life that has been stolen.”