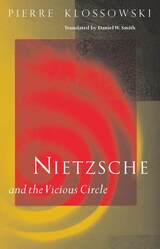 Long recognized as a masterpiece of Nietzsche scholarship, Nietzsche and the Vicious Circle is made available here for the first time in English. Taking a structuralist approach to the relation between Nietzsche's thought and his life, Klossowski emphasizes the centrality of the notion of Eternal Return (a cyclical notion of time and history) for understanding Nietzsche's propensities for self-denial, self-reputation, and self-consumption.

Nietzsche's ideas did not stem from personal pathology, according to Klossowski. Rather, he made a pathological use of his best ideas, anchoring them in his own fluctuating bodily and mental conditions. Thus Nietzsche's belief that questions of truth and morality are at base questions of power and fitness resonates dynamically and intellectually with his alternating lucidity and delirium.
TABLE OF CONTENTS