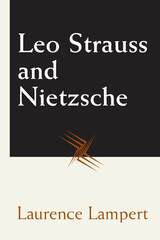 The influential political philosopher Leo Strauss has been credited by conservatives with the recovery of the great tradition of political philosophy stretching back to Plato. Among Strauss's most enduring legacies is a strongly negative assessment of Nietzsche as the modern philosopher most at odds with that tradition and most responsible for the sins of twentieth-century culture—relativism, godlessness, nihilism, and the breakdown of family values. In fact, this apparent denunciation has become so closely associated with Strauss that it is often seen as the very core of his thought.

In Leo Strauss and Nietzsche, the eminent Nietzsche scholar Laurence Lampert offers a controversial new assessment of the Strauss-Nietzsche connection. Lampert undertakes a searching examination of the key Straussian essay, "Note on the Plan of Nietzsche's Beyond Good and Evil." He shows that this essay, written toward the end of Strauss's life and placed at the center of his final work, reveals an affinity for and debt to Nietzsche greater than Strauss's followers allow. Lampert argues that the essay comprises the most important interpretation of Nietzsche ever published, one that clarifies Nietzsche's conception of nature and of human spiritual history and demonstrates the logical relationship between the essential themes in Nietzsche's thought—the will to power and the eternal return.
TABLE OF CONTENTS