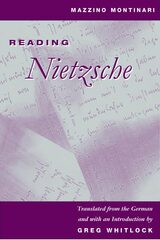 Reading Nietzsche
by Mazzino Montinari and Greg Whitlock
University of Illinois Press, 1982
Cloth: 978-0-252-02798-7
An important figure in the development of Nietzsche scholarship, Mazzino Montinari (1928-86) dedicated himself to the detailed study of the philosopher’s writings. This lifetime of scholarship crystallized in Montinari’s work as coeditor of the critical edition of Nietzsche’s collected writings. Reading Nietzsche, now available in English for the first time, is a group of essays that grew out of this monumental work.
In Reading Nietzsche Montinari tackles such subjects as the relationship between Nietzsche and Wagner, early drafts of Thus Spoke Zarathustra, and the philosopher’s reputation among the Nazis and Marxists of the 1930s and 1940s. He also deals authoritatively with a number of figures who have had an unfortunate influence upon the way Nietzsche has been understood, from the chief Nazi interpreter of Nietzsche, Alfred Bäumler, to the chief Marxist interpreter, Georg Lukàcs, to Nietzsche’s sister, Elisabeth.