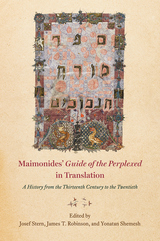 Moses Maimonides’s Guide of the Perplexed is the greatest philosophical text in the history of Jewish thought and a major work of the Middle Ages. For almost all of its history, however, the Guide has been read and commented upon in translation—in Hebrew, Latin, Spanish, French, English, and other modern languages—rather than in its original Judeo-Arabic. This volume is the first to tell the story of the translations and translators of Maimonides’ Guide and its impact in translation on philosophy from the Middle Ages to the present day.

A collection of essays by scholars from a range of disciplines, the book unfolds in two parts. The first traces the history of the translations of the Guide, from medieval to modern renditions. The second surveys its influence in translation on Latin scholastic, early modern, and contemporary Anglo-American philosophy, as well as its impact in translation on current scholarship. Interdisciplinary in approach, this book will be essential reading for philosophers, historians, and religious studies scholars alike.
AUTHOR BIOGRAPHY
Josef Stern is the William H. Colvin Professor of Philosophy Emeritus at the University of Chicago and the founding director of its Joyce Z. and Jacob Greenberg Center for Jewish Studies. His books include The Matter and Form of Maimonides’ “Guide.”James T. Robinson is the Caroline E. Haskell Professor of the History of Judaism, Islamic Studies, and the History of Religions at the University of Chicago. He is the author or editor of several books, including The Cultures of Maimonideanism. Yonatan Shemesh is a doctoral candidate at the University of Chicago completing his dissertation on Moses Narboni’s fourteenth-century commentary on the Guide of the Perplexed.
TABLE OF CONTENTS

Part I: The History of Translations of the Guide

1.         Moreh ha-nevukhim: The First Hebrew Translation of the Guide of the Perplexed
James T. Robinson

2.         Al-Ḥarizi’s Translation of the Guide of the Perplexed in Its Cultural Moment
Raymond P. Scheindlin

3.         Dux neutrorum and the Jewish Tradition of the Guide of the Perplexed
Caterina Rigo

5.         The Second Ibn Tibbon: Salomon Munk and His Translation of the Guide
Paul B. Fenton

7.         The Elegance of Precision: On Pines’s Translation of the Literary Parts of the Guide
Sarah Stroumsa

11.       Key Terms in Translations of Maimonides’ Guide of the Perplexed
Steven Harvey

Part II: The Impact of the Guide in Translation

12.       Maimonides and Aquinas on Divine Attributes: The Importance of Avicenna
Richard C. Taylor

13.       The Guide of the Perplexed in Early Modern Philosophy and Spinoza
Steven Nadler

14.       Shlomo Pines and the Rediscovery of Maimonides in Contemporary Philosophy
Kenneth Seeskin

15.       Maimonides as a Student of Islamic Religious Thought: Revisiting Shlomo Pines’s “Translator’s Introduction” and Its Comments on al-Ghazālī
Frank Griffel

Editions and Translations of the Guide
Bibliography
List of Contributors
Index