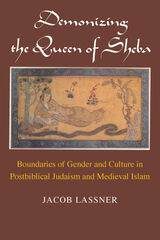 Over the centuries, Jewish and Muslim writers transformed the biblical Queen of Sheba from a clever, politically astute sovereign to a demonic force threatening the boundaries of gender. In this book, Jacob Lassner shows how successive retellings of the biblical story reveal anxieties about gender and illuminate the processes of cultural transmission.

The Bible presents the Queen of Sheba's encounter with King Solomon as a diplomatic mission: the queen comes "to test him with hard questions," all of which he answers to her satisfaction; she then praises him and, after an exchange of gifts, returns to her own land. By the Middle Ages, Lassner demonstrates, the focus of the queen's visit had shifted from international to sexual politics. The queen was now portrayed as acting in open defiance of nature's equilibrium and God's design. In these retellings, the authors humbled the queen and thereby restored the world to its proper condition.

Lassner also examines the Islamization of Jewish themes, using the dramatic accounts of Solomon and his female antagonist as a test case of how Jewish lore penetrated the literary imagination of Muslims. Demonizing the Queen of Sheba thus addresses not only specialists in Jewish and Islamic studies, but also those concerned with issues of cultural transmission and the role of gender in history.
AUTHOR BIOGRAPHY

Jacob Lassner is the Phillip M. and Ethel Klutznick Professor Emeritus of Jewish Civilization and professor of history and religion at Northwestern University. His numerous works include The Middle East Remembered, Jews and Muslims in the Arab World, and Islam in the Middle Ages.


Preface
Acknowledgments
Introduction
1. Biblical and Postbiblical Accounts
A. The Biblical Account
B. The Midrash Mishle
C. The Midrash ha-Hefez
D. The Targum Sheni to the Book of Esther
E. The Stories of Ben Sira
F. The Origins of the Dangerous/Demonic Queen
2. The Qur'anic Story of Solomon and the Queen of Sheba
A. The Account of the Queen's Visit
B. Muslim Scripture and Jewish Sources
C. The Nature of the Qur'anic Version
3. Later Muslim Versions
A. Tha'labi's Account
B. The Missing Hoopoe
C. Bilqis
D. A Noble Letter
E. The Mission to Solomon
F. The Queen's Visit
G. The Fate of Bilqis
4. A Reading of Tha'labi's Solomon and the Queen of Sheba
A. Concern for an Orderly Universe
B. The Prophet's Mandate
C. The Danger of Crossing Gender Boundaries
D. The Queen's Challenge to Man and Divine Order
E. Submission to Male Authority
F. Postscript: Universal versus Particular
5. Islamizing Universal and Specifically Jewish Themes
A. The Significance of the Queen's Throne
B. Muslim Markings
C. Islamizing the Story of the Hoopoe
D. Jewish Themes and Settings
E. The One Who Had Knowledge of the Book
F. Asaph Son of Berechiah
G. The Mightiest Name of God
H. Traces of Jewish Themes
I. Muslim Uses of the Jewish Past
6. The Transfer and Absorption of Cultural Artifacts
A. Islamizing Jewish Memorabilia
B. The Queen's Visit: Some Methodological Considerations
C. Cases in Point
D. Islamized Artifacts Entering/Reentering Jewish Tradition
E. The Queen's Origins: A Late Yemenite Version
F. Solomon's Campaign against the Island King
G. Solomon and the Queen of Sheba According to Saadiah Ben Joseph
H. Recent Jewish Folklore
Postscript
Appendix: Texts in Translation
A. The Queen's Visit: I Kings 10:1-13
B. The Queen of Sheba in the Midrash Mishle (Proverbs)
C. Riddles of the Midrash ha-Hefez
D. The Targum Sheni to the Book of Esther
E. Pseudo Ben Sira on the Queen's Visit
F. The Yemenite Tale of Saadiah Ben Joseph
G. Recent Jewish Folklore and the Folkloric Texts
H. Various Qur'anic Texts
I. Tha'labi's Version of Sulayman and Bilqis, the Queen
J. Passages from al-Kisa'i
Abbreviations
Notes
Bibliography
Index of Biblical Verses
General Index