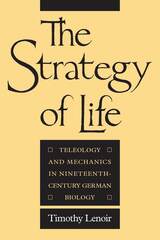 The Strategy of Life: Teleology and Mechanics in Nineteenth-Century German Biology
by Timothy Lenoir
University of Chicago Press, 1989
Paper: 978-0-226-47183-9
In the early nineteenth century, a group of German biologists led by Johann Friedrich Blumenbach and Karl Friedrich Kielmeyer initiated a search for laws of biological organization that would explain the phenomena of form and function and establish foundations for a unified theory of life. The tradition spawned by these efforts found its most important spokesman in Karl Ernst von Baer. Timothy Lenoir chronicles the hitherto unexplored achievements of the practitioners of this research tradition as they aimed to place functional morphology at the heart of a new science, which they called "biology."

Strongly influenced by Immanuel Kant, the biologists' approach combined a sophisticated teleology with mechanistic theories and sparked bitter controversies with the rival programs, mechanistic reductionism and Darwinism. Although temporarily eclipsed by these two approaches, the morphological tradition, Lenoir argues, was not vanquished in the field of scientific debate. It contributed to pathbreaking research in areas such as comparative anatomy, embryology, paleontology, and biogeography.
TABLE OF CONTENTS