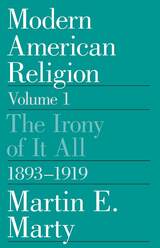 Martin E. Marty argues that religion in twentieth-century America was essentially shaped by its encounter with modernity. In this first volume, he records and explores the diverse ways in which American religion embraced, rejected, or cautiously accepted the modern world.

"Marty writes with the highest standards of scholarship and with his customary stylistic grace. No series of books is likely to tell us as much about the religious condition of our own time as "Modern American Religion."—Robert L. Spaeth, Minneapolis Star Tribune

"The wealth of material and depth of insight are beyond reproach. This book will clearly stand as an important meteorological guide to the storm front of modernity as it swept Americans into the twentieth century."—Belden C. Lane, Review of Religions

"Whatever one thinks about Marty's theological or philosophical position as a historian, the charm of his friendly circumspective approach to American religious history is irresistible."—John E. Wilson, Theological Studies

"Marty attempts to impose historical order on the divergent ways a century of Americans have themselves tried to find order in their worlds. . . . [He] meets the challenge deftly. . . . It is a book relevant to our time. . . . Engages the heart and mind jointly."—Andy Solomon, Houston Post
TABLE OF CONTENTS


Acknowledgments
1. Modern Religion and Irony
Part One: The Modernists
2. A Cosmopolitan Habit in Theology
3. A Religious Spirit of the Age
4. Only Trying to Save the Bible
Part Two: The Moderns
5. The Progressives and the Past
6. The Right to Believe
7. In Search of an Ecclesia
Part Three: Modernity
8. Peoplehood as a Cocoon
Reservation and the Tribal Native American
Segregation and the Separate, Not Equal, Blacks
Exclusion and the Asians
The Hispanics: "As Loyal As Any Other Americans"
"The Jews Don't Want to Merge"
Orthodoxy: Primitive, Pure, and Chaste
"I Am an American Catholic Citizen"
9. Denomination as a Canopy
The Frontier Churches after the Frontier
The Lutherans and Their Languages
Mainstream Catholic Programs
Part Four: Countermodernism
10. Conservative Catholicism and Judaism
11. The Carapaces of Reactive Protestantism
The Hard Line in the New Evangelism
A Competitive Philosophy of History: Premillennialism
The Protective Weapon of Biblical Inerrancy
Pentecostalism: "Almost Imcomprehensible at This Day"
Part Five: The Transmodern
12. Restitutio ad Integrum: The Schism in the Soul
13. The Sin of Schism and the Reunion of the Churches
14. Social Christianity as a Recovered Wholeness
15. The Nation: Beyond Divisions, One Cause
Conclusion: On Ironic Interpretation
Notes
Index