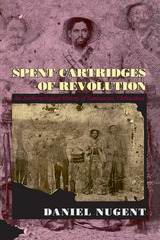 What happens to a revolutionary town after the revolution? This apparently simple question frames Spent Cartridges of Revolution, an anthropological history of Namiquipa, Chihuahua, Mexico. Officially, the revolution of 1910-20 restored control over land and local politics to the peasantry. But Namiquipan peasants, who fought alongside Pancho Villa, have seen little progress and consider themselves mere "spent cartridges" of a struggle that benefited other classes.

Daniel Nugent's approach combines an emphasis on peasants' own perceptions of Mexican society after the revolution with an analysis of the organization and formation of state power. He shows that popular discontent in Chihuahua is motivated not only by immediate economic crises but by two centuries of struggle between the people of Northern Mexico and the government.
TABLE OF CONTENTS


Preface
Abbreviations
1. Ethnography and Social Analysis
Approaching the Field
Writing History through the Ethnographic Present
Beyond the Ethnographic Present
2. Geopolitics of the Colonial Frontier: Civilization and Barbarism, 1660s-1850s
Geopolitics of the Colonial Frontier
Apache Wars and Dispossession of Lands
3. Property, State, and Revolution: The New Barbarism, 1860s-1910s
Namiquipa and the Landlords
The Fetishism of Commodities
Conflict with the State
The Meaning of Land Use in Namiquipa
Land during the Revolution
Land in a Period of Transition
4. Agrarian Reform in Western Chihuahua, 1920s
The Revolutionary State and the Agrarian Reform
Revolutionary Pueblos and the State
The Formation of the Ejido in Namiquipa
Deformation of the Ejido
5. The Legacy of Agrarian Reform in Namiquipa
Cui Bono?
The Ejido in Popular Ideology
Distribution and Use of Land in Namiquipa
6. Classes of Labor and the Status of Work
The Transformation of Agricultural Labor in Namiquipa
Social Class or Labor Process?
7. Social Relations and Relations of Power: The Politics of Community-State Relations
Community and State
The Historicity of the Ethnographic Present
From Civilizing Vanguard to Frontier Backwater to "Problem" Municipio
Notes
Bibliography
Index