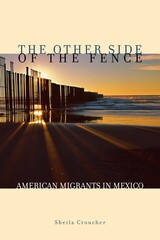 A growing number of Americans, many of them retirees, are migrating to Mexico's beach resorts, border towns, and picturesque heartland. While considerable attention has been paid to Mexicans who immigrate to the U.S., the reverse scenario receives little scrutiny. Shifting the traditional lens of North American migration, The Other Side of the Fence takes a fascinating look at a demographic trend that presents significant implications for the United States and Mexico.

The first in-depth account of this trend, Sheila Croucher's study describes the cultural, economic, and political lives of these migrants of privilege. Focusing primarily on two towns, San Miguel de Allende in the mountains and Ajijic along the shores of Lake Chapala, Croucher depicts the surprising similarities between immigrant populations on both sides of the border. Few Americans living in Mexico are fluent in the language of their new land, and most continue to practice the culture and celebrate the national holidays of their homeland, maintaining close political, economic, and social ties to the United States while making political demands on Mexico, where they reside.

Accessible, timely, and brimming with eye-opening, often ironic, findings, The Other Side of the Fence brings an important perspective to borderlands debates.

Author of Imagining Miami and Globalization and Belonging, Sheila Croucher is the Paul Rejai Professor of Political Science and American Studies at Miami University in Oxford, Ohio.