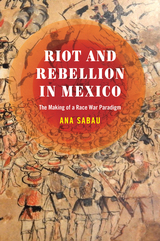 Many scholars assert that Mexico’s complex racial hierarchy, inherited from Spanish colonialism, became obsolete by the turn of the nineteenth century as class-based distinctions became more prominent and a largely mestizo population emerged. But the residues of the colonial caste system did not simply dissolve after Mexico gained independence. Rather, Ana Sabau argues, ever-present fears of racial uprising among elites and authorities led to persistent governmental techniques and ideologies designed to separate and control people based on their perceived racial status, as well as to the implementation of projects for development in fringe areas of the country. Riot and Rebellion in Mexico traces this race-based narrative through three historical flashpoints: the Bajío riots, the Haitian Revolution, and the Yucatan’s caste war. Sabau shows how rebellions were treated as racially motivated events rather than political acts and how the racialization of popular and indigenous sectors coincided with the construction of “whiteness” in Mexico. Drawing on diverse primary sources, Sabau demonstrates how the race war paradigm was mobilized in foreign and domestic affairs and reveals the foundations of a racial state and racially stratified society that persist today.
AUTHOR BIOGRAPHY
Ana Sabau is an assistant professor of Spanish at the University of Michigan, Ann Arbor.