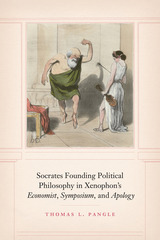 The oeuvre of the Greek historian Xenophon, whose works stand with those of Plato as essential accounts of the teachings of Socrates, has seen a new surge of attention after decades in the shadows. And no one has done more in recent years to spearhead the revival than Thomas L. Pangle. Here, Pangle provides a sequel to his study of Xenophon’s longest account of Socrates, the Memorabilia, expanding the scope of inquiry through an incisive treatment of Xenophon’s shorter Socratic dialogues, the Economist, the Symposium, and the Apology of Socrates to the Jury. What Pangle reveals is that these three depictions of Socrates complement and, in fact, serve to complete the Memorabilia in meaningful ways.

Unlike the Socrates of Plato, Xenophon’s Socrates is more complicated and human, an individual working out the problem of what it means to live well and virtuously. While the Memorabilia defends Socrates by stressing his likeness to conventionally respectable gentlemen, Xenophon’s remaining Socratic texts offer a more nuanced characterization by highlighting how Socrates also diverges from conventions of gentlemanliness in his virtues, behaviors, and peculiar views of quotidian life and governmental rule. One question threads through the three writings: Which way of life best promotes human existence, politics, and economics—that of the Socratic political philosopher with his philosophic virtues or that of the gentleman with his familial, civic, and moral virtues? In uncovering the nuances of Xenophon’s approach to the issue in the Economist, Symposium, and Apology, Pangle’s book cements the significance of these writings for the field and their value for shaping a fuller conception of just who Socrates was and what he taught.
AUTHOR BIOGRAPHY
Thomas L. Pangle is the Joe R. Long Chair in Democratic Studies and codirector of the Thomas Jefferson Center for the Study of Core Texts and Ideas at the University of Texas at Austin. His many books include, most recently, The Socratic Way of Life, also published by the University of Chicago Press.

REVIEWS
“A companion volume to Pangle’s recent study of Xenophon’s Memorabilia, Socrates Founding Political Philosophy in Xenophon’s “Economist,” “Symposium,” and “Apology" completes his study of the four writings Xenophon devoted to his philosophic teacher, Socrates. Together they constitute a tour de force of genuinely philosophic engagement with the texts. It is exceedingly rare to encounter the combination on display here of philological exactness, command of the secondary literature, and a truly philosophical depth. A remarkable accomplishment that will bring Xenophon the philosopher to a new generation of students and scholars.”
— Robert C. Bartlett, Boston College

“It is high time that Xenophon’s Socratic works be reexamined with an eye to the founding of political philosophy, and no one is better situated to do this than Pangle.”
— Paul Rahe, Hillsdale College

1. The Socratic Science of Economics
The Interlocutor Critobulus
The High Status of the Theme of “Household Management”
Economics as a Universal Science
The True, Scientific Meaning of Riches
Virtue Is Knowledge
The Wealthy Philosopher and the Impoverished Young Magnate
Socrates Evades Responsibility

2. The Case for Farming
The Most Resplendent Farming
Free Citizen-Farmers
Critobulus’s Telling Objection
The Conversion of Critobulus to Farming

4. Teaching Socrates the Activities of a Gentleman
The Gentleman’s Magnificence
The Gentleman as Speaker and Reasoner
Socrates Makes a Mistake

5. Teaching Socrates How a Gentleman Educates His Overseers
In Good Will Toward Himself
In Diligence
In Knowledge of the Art of Farming
In Skilled Rule
In a Certain Virtue of Justice
Socrates’s Summary Review of the Education of the Overseers

6. Teaching Socrates the Art of Farming
Earth’s Complex Nature, or, Her Divine Simplicity?
Philosophic Preparation of Fallow for Sowing
Socratic Sowing, Under God
The Other Main Tasks of Cereal Farming
Planting Trees and Vines
Diligence vs. Knowledge
The Progressive Spirit of the Gentleman Farmer
The Loftiness of the Gentleman’s Skilled Rule

7. Socrates Leading the Festivity of Gentlemen in the Symposium
The Setting
Autolycus: The Beautiful Power of the God of Love
Breaking the Spell of Divine Erotic Beauty
Lycon: Civic Virtue and Socratic Virtue
Socrates Strives to Maintain the Upper Hand
Callias Vindicates His Claim to Superior Wisdom
Niceratus: The Sidekick of Callias
Critobulus: The Sensually Beautiful Socratic
Charmides: The Politically Restless Socratic
Antisthenes: The Moralistic Socratic
Hermogenes: The Pious Socratic
Foreshadowing the First Part of the Indictment of Socrates
Socratic “Pimping” and “Procuring”
Socratic Beauty
Foreshadowing the Most Serious Part of the City’s Indictment of Socrates
Socrates Becomes the Teacher of the “Syracusan”
Socrates’s Oratorical Presentation of His Political Philosophizing
Xenophon’s Art of Socratic Portraiture

8. Deliberate Defiance in the Apology
The Puzzle as to the Purpose of Socrates’s Offensive Boastfulness
Hermogenes as a Key to the Apology
What Hermogenes Embodies
The Strategic Importance of Hermogenes
Hermogenes as Apt Conduit for Socrates’s Self-Disclosure
What the Report of the Pretrial Conversation with Hermogenes Reveals
Socrates’s Whole Life as His Defense
The Relations between Socrates and His God(s)
Socrates on the Relation between the Pleasant and the Good
Socrates’s Moral Satisfaction with His Entire Life
Socrates’s Self-Admiration
The Close of the Conversation
What the Report of the Defense Speech Reveals
The Rebuttal of the Charge of Impiety
The Rebuttal of the Charge of Corrupting the Young
After the Trial

At the Trial, After the Verdict

Appendix: Preliminary Observations on the Contrasts and Complementarities between Xenophon’s and Plato’s Presentations of Socrates