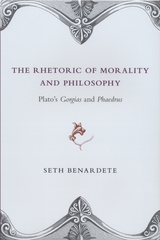 The Rhetoric of Morality and Philosophy, one of the most groundbreaking works of twentieth-century Platonic studies, is now back in print for a new generation of students and scholars to discover. In this volume, distinguished classicist Seth Benardete interprets and pairs two important Platonic dialogues, the Gorgias and the Phaedrus, illuminating Socrates’ notion of rhetoric and Plato’s conception of morality and eros in the human soul.

Following his discussion of the Gorgias as a dialogue about the rhetoric of morality, Benardete turns to the Phaedrus as a discourse about genuine rhetoric, namely the science of eros, or true philosophy. This novel interpretation addresses numerous issues in Plato studies: the relation between the structure of the Gorgias and the image of soul/city in the Republic, the relation between the structure of Phaedrus and the concept of eros, and Socrates’ notion of ignorance, among others.

Seth Benardete (1930–2001) was a classicist and philosopher who taught at New York University and the New School. He is the author of many books, including The Tragedy and Comedy of Life: Plato’s Philebus, also published by the University of Chicago Press.