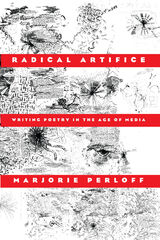 How the negotiation between poetic and media discourses takes place is the subject of Marjorie Perloff's groundbreaking study. Radical Artifice considers what happens when the "natural speech" model inherited from the great Modernist poets comes up against the "natural speech" of the Donahue "talk show," or again, how visual poetics and verse forms are responding to the languages of billboards and sound bytes. Among the many poets whose works are discussed are John Ashbery, George Oppen, Susan Howe, Clark Coolidge, Lyn Hejinian, Leslie Scalapino, Charles Bernstein, Johanna Drucker, and Steve McCaffery. But the strongest presence in Perloff's book is John Cage, a "poet" better known as a composer, a philosopher, a printmaker, and one who understood, almost half a century ago, that from now on no word, musical note, painted surface, or theoretical statement could ever again escape "contamination" from the media landscape in which we live. It is under his sign that Radical Artifice was composed.
TABLE OF CONTENTS


List of Illustrations
Preface
Acknowledgments
1: Avant-Garde or Endgame?
2: The Changing Face of Common Intercourse: Talk Poetry, Talk Show, and the Scene of Writing
3: Against Transparency: From the Radiant Cluster to the Word as Such
4: Signs Are Taken for Wonders: The Billboard Field as Poetic Space
5: The Return of the (Numerical) Repressed: From Free Verse to Procedural Play
6: How It Means: Making Poetic Sense in Media Society
7: cage: chance: change
Notes
Index