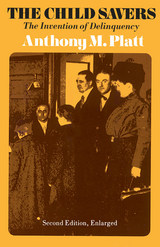 Anthony Platt's study, a chronicle of the child-saving movement and the juvenile court, explodes myth after myth about the benign character of both. The movement is described not as an effort to liberate and dignify youth but as a punitive, romantic, and intrusive effort to control the lives of lower-class urban adolescents and to maintain their dependent status. In so doing Platt analyzes early views of criminal behavior, the origins of the reformatory system, the social values of middle-class reformers, and the handling of youthful offenders before and after the creation of separate juvenile jurisdictions.

In this second, enlarged edition of The Child Savers, the author has added a new introduction and postscript in which he critically reflects upon his original analysis, suggests new ways of thinking about the child-saving movement, and summarizes recent developments in the juvenile justice system.
AUTHOR BIOGRAPHY
Anthony M. Platt is a professor in the School of Social Work at California State University at Sacramento. He is the author of The Politics of Riot Commissions, and coauthor of Policing America and The Iron Fist and the Velvet Glove: An Analysis of the U.S. Police.
TABLE OF CONTENTS


Preface
Introduction to the Second Edition
1. Introduction
Perspectives on the Origins of Delinquency
Re-Viewing Juvenile Justice
2. Images of Delinquency, 1870-1900
The Value of Punishment
The Natural Criminal
Nature Versus Nurture
Urban Disenchantment
Summary
3. The New Penology
Reformation of Youth
The New Education
To Cottage and Country
Treatment and Restraint
4. Maternal Justice
A Woman's Place
Portrait of a Child Saver: Louise de Koven Bowen
Portrait of a Child Saver: Jane Addams
The Dependency of Youth
5. The Child-Saving Movement in Illinois
Delinquent Children
Dependent Children
Children in Jail
Children of the State
Summary
6. The Fate of the Juvenile Court
A Friend in Court
Rhetoric and Reality
Moralism and Constitutionalism
In Defense of Youth
Summary
7. A Concluding Note
Postscript 1977
Appendix: The Criminal Responsibility of Children
Bibliography
Index