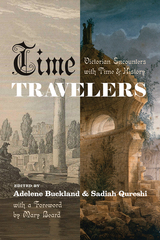 The Victorians, perhaps more than any Britons before them, were diggers and sifters of the past. Though they were not the first to be fascinated by history, the intensity and range of their preoccupations with the past were unprecedented and of lasting importance. The Victorians paved the way for our modern disciplines, discovered the primeval monsters we now call the dinosaurs, and built many of Britain’s most important national museums and galleries. To a large degree, they created the perceptual frameworks through which we continue to understand the past.

Out of their discoveries, new histories emerged, giving rise to fresh debates, while seemingly well-known histories were thrown into confusion by novel tools and methods of scrutiny. If in the eighteenth century the study of the past had been the province of a handful of elites, new technologies and economic development in the nineteenth century meant that the past, in all its brilliant detail, was for the first time the property of the many, not the few. Time Travelers is a book about the myriad ways in which Victorians approached the past, offering a vivid picture of the Victorian world and its historical obsessions.
AUTHOR BIOGRAPHY
Adelene Buckland is a senior lecturer in English literature at King’s College London. She is author of Novel Science: Fiction and the Invention of Nineteenth-Century Geology, also published by the University of Chicago Press, and coeditor of A Return to the Common Reader: Print Culture and the Novel, 1850–1900. Sadiah Qureshi is a senior lecturer in modern history at the University of Birmingham. She is the author of Peoples on Parade: Exhibitions, Empire, and Anthropology in Nineteenth-Century Britain, also published by the University of Chicago Press.
REVIEWS
"This is an excellently conceived collection that manages a tough balancing act very well indeed. It manages to cover a huge range of topics and approaches to the Victorians’ engagement with their past, and at the same time is to be commended for its unity. Time Travelers serves as a model of what can result not just from critical and reflective engagement on a theme, but from sustained conversations around research and writing. I look forward to seeing the impact this terrific volume will assuredly make on Victorian scholarship."
— Kate Flint, USC Dana and David Dornsife College of Letters, Arts and Sciences

“A feast of historical insights into Victorian life and culture, Time Travelers is an original volume certain to become a classic in its multifaceted field. This invaluable work from an impressive array of scholarly contributors combines depth with wide appeal.”
— Crosbie Smith, University of Kent

“A bold experiment in interdisciplinarity… An edited volume much more coherent than are others of the genre, twelve essays artfully organized around the themes of narratives, origins, time in transit, and unfinished business. Contributors engage with each other and with recent scholarship, challenging assumptions about nineteenth-century pride in progress and sense of superiority… Time Travelers is a useful, rich, thought-provoking set of essays that ought to make a substantial impact.”
— Journal of British Studies

1. Looking to Our Ancestors
Sadiah Qureshi

2. Looking Around the World
Peter Mandler

3. The World beneath Our Feet
Adelene Buckland

5. In the Beginning
Helen Brookman

9. Across the Divide
David Gange

12. How We Got Here
Daniel Wilson