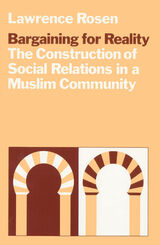 Much modern anthropology has assumed that an adequate description of any society consists of rules that inform its members' relationships and the logic that unites their cultural symbols. In this book Lawrence Rosen argues that, for the people who live in and around the Moroccan city of Sefrou, attachment to others and the terms by which they are conceived are, at their most fundamental level, subject to a constant process of negotiation.

Drawing on the philosophy of speech acts as well as interpretive theory, Rosen shows how, for the people of this Muslim community, reality consists of the network of obligations formed by individuals out of a repertoire of relational possibilities whose defining terms are comprised by a set of essentially negotiable concepts. He thus demonstrates that the bonds of family, tribe, and political alliance take shape only as the bargains struck in and through the malleable terms that describe them take shape; that statements about relationship are no more true than a price mentioned in the marketplace until properly validated; that the relations between men and women, Arabs and Berbers, Muslims and Jews test the limits of interpersonal negotiation; and that the concepts of time, character, and narrative style are consonant with a view of reality as bargained-for network of obligations.

Bargaining for Reality makes an important contribution to our understanding of contemporary Middle Eastern society and to the development of powerful new interpretive strategies for a wide range of social theorists.

"[Rosen's] book is extremely useful for African and Middle Eastern historians, because he challenges some of our most basic ideas about the nature and force of kinship, tribe, ethnicity, and other large- and small-scale political ties."—Allan R. Meyers, International Journal of African Historical Studies

"The book conveys a compelling image of Moroccan social experience and is peppered with vivid anecdotes and case histories."—Stephen William Foster, American Anthropologist
TABLE OF CONTENTS


Preface
One - Bargaining for Reality
The Nature of the Problem
Sefrou: The Cultural and Social Landscape
Two - The Construction of Social Identity
Attributing Traits and Ties
The Nature of Human Nature
The Problem of Other Minds in Morocco
Knowledge and Cultural Logic
Three - The Formation of Personal Networks
The Concept of Haqq
Negotiating Kinship
Building Networks
Validation: Attaching Utterances to Actions
Special Relations: Arabs and Berbers, Muslims and Jews
Summary: Repertoire and Performance
Four - Convention and Creation in the Construction of Social Reality
Homo Contextus: Situating Actors in the World
The Negotiation of Reality
References
Index