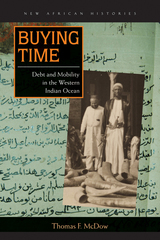 In Buying Time, Thomas F. McDow synthesizes Indian Ocean, Middle Eastern, and East African studies as well as economic and social history to explain how, in the nineteenth century, credit, mobility, and kinship knit together a vast interconnected Indian Ocean region. That vibrant and enormously influential swath extended from the desert fringes of Arabia to Zanzibar and the Swahili coast and on to the Congo River watershed.

In the half century before European colonization, Africans and Arabs from coasts and hinterlands used newfound sources of credit to seek out opportunities, establish new outposts in distant places, and maintain families in a rapidly changing economy. They used temporizing strategies to escape drought in Oman, join ivory caravans in the African interior, and build new settlements.

The key to McDow’s analysis is a previously unstudied trove of Arabic business deeds that show complex variations on the financial transactions that underwrote the trade economy across the region. The documents list names, genealogies, statuses, and clan names of a wide variety of people—Africans, Indians, and Arabs; men and women; free and slave—who bought, sold, and mortgaged property. Through unprecedented use of these sources, McDow moves the historical analysis of the Indian Ocean beyond connected port cities to reveal the roles of previously invisible people.

Thomas F. McDow is an assistant professor of history at Ohio State University. He teaches courses on the history of Africa, the Indian Ocean, and the world.

TABLE OF CONTENTS
Contents
Illustrations
Acknowledgments
Note on Terms, Translation, and Transliteration
Introduction: Temporizing across the Indian Ocean
1: Drought and New Mobilities in the Omani Interior
2: The Customs Master and Customs of Credit in Zanzibar
3: Sultans at Sea
4: Halwa and Identity in the Western Indian Ocean World
5: Tippu Tip’s Kin, from Oman to the Eastern Congo
6: Freed Slaves
7: Acts for Consuls and Consular Acts
8: A Dhow on Lake Victoria
9: “Everything Is Pledgedto Its Time”
Epilogue
Notes
Bibliography
Index