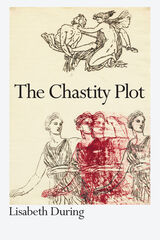 In The Chastity Plot, Lisabeth During tells the story of the rise, fall, and transformation of the ideal of chastity. From its role in the practice of asceticism to its associations with sovereignty, violence, and the purity of nature, it has been loved, honored, and despised. Obsession with chastity has played a powerful and disturbing role in our moral imagination. It has enforced patriarchy’s double standards, complicated sexual relations, and imbedded in Western culture a myth of gender that has been long contested by feminists  Still not yet fully understood, the chastity plot remains with us, and the metaphysics of purity continue to haunt literature, religion, and philosophy. Idealized and unattainable, sexual renunciation has shaped social institutions, political power, ethical norms, and clerical abuses. It has led to destruction and passion to seductive fantasies that inspired saints and provoked libertines. As During shows, it should not be underestimated.

Examining literature, religion, psychoanalysis, and cultural history from antiquity through the middle ages and into modernity, During provides a sweeping history of chastity and insight into its subversive potential. Instead of simply asking what chastity is, During considers what chastity can do, why we should care, and how it might provide a productive disruption, generating new ways of thinking about sex, integrity, and freedom.
AUTHOR BIOGRAPHY
Lisabeth During is associate professor of philosophy and aesthetics at Pratt Institute in Brooklyn, New York.

REVIEWS
“With astonishing breadth, sophistication, and erudition, The Chastity Plot spans from philosophy to literature and from Hollywood movies to Greek tragedy. With different global genealogies of chastity coming to the fore, investigating its grammar and place in Western culture is a crucial and timely endeavor. Rather than sanctifying chastity as source of perfection or dismissing it as source of oppression, During gives us the genealogy of the Western chastity plot in all of its complexity, ambivalences, and polyphonies.”
— Chiara Bottici, author of Imaginal Politics: Images Beyond Imagination and the Imaginary

Chapter 1    Is There a Chastity Plot?

Chapter 4    The Dangerous Mystique of Continence

Chapter 5    The Pure and the Impure: Pastoral and the Reversal of Nature

Chapter 6    A Virgin Enthroned: Power, Performance, and Poetry in the English Renaissance

Chapter 8    Losing the Plot: The Politics and Poetry of Modern Virginity