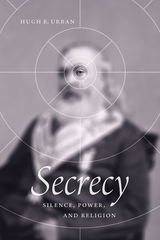 The powers of political secrecy and social spectacle have been taken to surreal extremes recently. Witness the twin terrors of a president who refuses to disclose dealings with foreign powers while the private data of ordinary citizens is stolen and marketed in order to manipulate consumer preferences and voting outcomes. We have become accustomed to thinking about secrecy in political terms and personal privacy terms. In this bracing, new work, Hugh Urban wants us to focus these same powers of observation on the role of secrecy in religion.

With Secrecy, Urban investigates several revealing instances of the power of secrecy in religion, including nineteenth-century Scottish Rite Freemasonry, the sexual magic of a Russian-born Parisian mystic; the white supremacist BrüderSchweigen or “Silent Brotherhood” movement of the 1980s, the Five Percenters, and the Church of Scientology. An electrifying read, Secrecy is the culmination of decades of Urban’s reflections on a vexed, ever-present subject.
AUTHOR BIOGRAPHY
Hugh Urban is professor of religion and comparative studies at the Ohio State University. He is the author of several books, including Tantra: Sex, Secrecy, Politics, and Power in the Study of Religion, The Church of Scientology: A History of a New Religion, and Zorba the Buddha: Sex, Spirituality, and Capitalism in the Global Osho Movement.

Introduction    The Vestment of Power

1    The Adornment of Silence: Secrecy and Symbolic Power in American Freemasonry

2    The Secret Doctrine: The Advertisement of the Secret in the Theosophical Society and the Esoteric Section

3    The Seduction of the Secret: Eros and Magic in Twentieth-Century Europe

4    Secrecy and Social Resistance: The Five-Percenters and the Arts of Subversive Bricolage

5    The Terror of Secrecy: Racism, Masculinity, and Violence in the late Brüder Schweigen

6    The Third Wall of Fire: Scientology and the Study of Religious Secrecy in the Twenty-First Century

Conclusions    The Science of the Hidden: Secrecy and the Critical Study of Religion in an Age of Surveillance