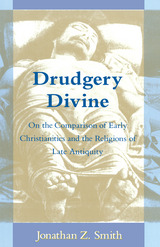 In this major theoretical and methodological statement on the history of religions, Jonathan Z. Smith shows how convert apologetic agendas can dictate the course of comparative religious studies. As his example, Smith reviews four centuries of scholarship comparing early Christianities with religions of late Antiquity (especially the so-called mystery cults) and shows how this scholarship has been based upon an underlying Protestant-Catholic polemic. The result is a devastating critique of traditional New Testament scholarship, a redescription of early Christianities as religious traditions amenable to comparison, and a milestone in Smith's controversial approach to comparative religious studies.

"An important book, and certainly one of the most significant in the career of Jonathan Z. Smith, whom one may venture to call the greatest pathologist in the history of religions. As in many precedent cases, Smith follows a standard procedure: he carefully selects his victim, and then dissects with artistic finesse and unequaled acumen. The operation is always necessary, and a deconstructor of Smith's caliber is hard to find."—Ioan P. Coulianu, Journal of Religion
AUTHOR BIOGRAPHY
Jonathan Z. Smith is the Robert O. Anderson Distinguished Service Professor of the Humanities in the College of the University of Chicago.
TABLE OF CONTENTS