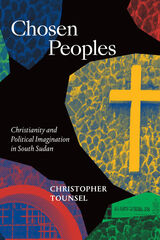 On July 9, 2011, South Sudan celebrated its independence as the world's newest nation, an occasion that the country's Christian leaders claimed had been foretold in the Book of Isaiah. The Bible provided a foundation through which the South Sudanese could distinguish themselves from the Arab and Muslim Sudanese to the north and understand themselves as a spiritual community now freed from their oppressors. Less than three years later, however, new conflicts emerged along ethnic lines within South Sudan, belying the liberation theology that had supposedly reached its climactic conclusion with independence. In Chosen Peoples, Christopher Tounsel investigates the centrality of Christian worldviews to the ideological construction of South Sudan and the inability of shared religion to prevent conflict. Exploring the creation of a colonial-era mission school to halt Islam's spread up the Nile, the centrality of biblical language in South Sudanese propaganda during the Second Civil War (1983--2005), and postindependence transformations of religious thought in the face of ethnic warfare, Tounsel highlights the potential and limitations of deploying race and Christian theology to unify South Sudan.
AUTHOR BIOGRAPHY
Christopher Tounsel is Catherine Shultz Rein Early Career Professor in the College of the Liberal Arts and Assistant Professor of History and African Studies at Pennsylvania State University.
REVIEWS
“Christopher Tounsel makes a major contribution to the study of South Sudanese political thought. He has drawn on the literature of Black liberation theology in Africa as well as the Americas, giving the South Sudanese a place in the theoretical literature that has excluded them up to now. Chosen Peoples presents unique material that has the potential to shift the way we understand the history of Sudan and South Sudan and the role of religion in politics more generally.”

“Chosen Peoples is a remarkable achievement, revealing unexplored chapters of South Sudanese history and placing them into a novel analytic frame that will impact how we think about postcolonial liberation for many years to come. In this brave book, Christopher Tounsel does not shy away from asking difficult questions of his material, the reward being that he opens considerable space for thinking anew about the mutual construction of race and religion in the two Sudans and beyond.”

-- Noah Salomon, author of For Love of the Prophet: An Ethnography of Sudan’s Islamic State