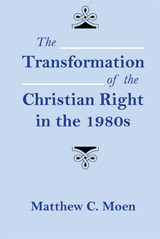 The Transformation of the Christian Right chronicles and analyzes the remarkable changes that have occurred in the Christian Right from its emergence in the late 1970s to the present. It documents the rapid turnover of Christian-Right organizations and explains the forces driving that kaleidoscopic change. Moen also traces the strategic shift of the movement’s leaders, away from lobbying the Congress and toward mobilizing conservative activists in the grass roots; he demonstrates the substitution of liberal language (with its emphasis on “equality, rights, and freedom”) for moralistic language (with its focus on “right and wrong”). Much has been written about the Christian Right’s impact on politics but little about how years of political activism have shaped and influenced the Christian Right. Moen addresses that neglected side of the issue.

Matthew C. Moen is Dean of the College of Arts and Sciences, Professor of Political Science, and Lohre Distinguished Professor, University of South Dakota.