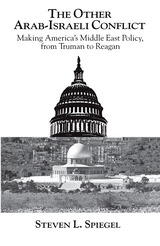 The Other Arab-Israeli Conflict illuminates the controversial course of America's Middle East relations from the birth of Israel to the Reagan administration. Skillfully separating actual policymaking from the myths that have come to surround it, Spiegel challenges the belief that American policy in the Middle East is primarily a relation to events in that region or is motivated by bureaucratic constraints or the pressures of domestic politics. On the contrary, he finds that the ideas and skills of the president and his advisors are critical to the determination of American policy. This volume received the 1986 National Jewish Book Award.
AUTHOR BIOGRAPHY
Steven L. Spiegel is professor of political science at the University of California, Los Angeles. He has written extensively on international politics, American foreign policy, and the Middle East.
TABLE OF CONTENTS