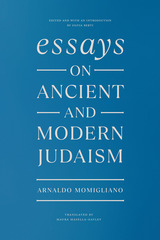 Arnaldo Momigliano (1908-87) was one of the most distinguished twentieth-century scholars of the classics and of ancient and modern history. Throughout his career, but especially in the final twenty years of his life, he wrote essays on a variety of Jewish themes and individuals. This volume collects twenty-six of these essays, most of which appear in English for the first time.

Momigliano acknowledged that his Judaism was the most fundamental inspiration for his scholarship, and the writings in this collection demonstrate how the ethical experience of the Hebraic tradition informed his other works. Part 1 is devoted entirely to writings on ancient and medieval Judaism. In these essays, Momigliano ranges over such subjects as the stages of rapport between Hellenism and Judaism, the figure of Flavius Josephus, and the salient moments of Maccabean history. Part 2 comprises Momigliano's writings on modern subjects. Here are profiles of Jewish scholars of the classical world (Bernays, Bickerman, and Finley) together with those of eminent representatives of contemporary Jewish thought (Strauss, Scholem, and Benjamin). These essays gain special significance alongside Momigliano's reflections on Italian Jewry and the Weberian interpretation of Judaism.

Silvia Berti's Introduction discusses Momigliano's religious and intellectual formation, the key events of his life, and the influence of Judaism on his mature scholarship. In his Preface, Momigliano offers a personal meditation on his own Judaism and that of his family.

By the time of his death, Momigliano had acquired an international following. This volume will at last give his admirers in the English-speaking world easy access to an important body of his work.
AUTHOR BIOGRAPHY
Arnaldo Momigliano (1908-87) was professor of ancient history at the University of London and professor at Scuola Normale Superiore in Pisa. At regular intervals from 1959 to 1987, he was also the Alexander White Visiting Professor at the University of Chicago.
TABLE OF CONTENTS


Introduction by Silvia Berti
Preface
Part One
1. Biblical Studies and Classical Studies: Simple Reflections upon the Historical Method
2. Jews and Greeks
3. Daniel and the Greek Theory of Imperial Succession
4. The Second Book of Maccabees
5. Problems of Method in the Interpretation of Judeo-Hellenistic Symbols
6. An Apology of Judaism: The Against Apion by Flavius Josephus
7. What Flavius Josephus Did Not See
8. Flavius Josephus and Alexander's Visit to Jerusalem
9. Preliminary Indications on the Apocalypse and Exodus in the Hebrew Tradition
10. Prophecy and Historiography
11. A Medieval Jewish Autobiography
Part Two
12. The Jews of Italy
13. Jewish Stories and Memoirs of Our Times
14. Felice Momigliano (1866-1924)
15. Jacob Bernays
16. A Note on Max Weber's Definition of Judaism as a Pariah Religion
17. Hermeneutics and Classical Political Thought in Leo Strauss
18. Gershom Scholem's Autobiography
19. Walter Benjamin
20. Moses Finley on Slavery: A Personal Note
21. Gertrud Bing (1892-1964)
22. In Memoriam—Eduard Fraenkel
23. The Absence of the Third Bickerman
Appendixes
1. A Review of Cecil Roth's Gli Ebrei in Venezia
2. Judaism and Anti-Semitism, by A. Gramsci
General Index
Index to Biblical and Talmudic References