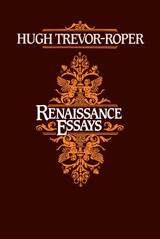 Hugh Trevor-Roper's historical essays, published over many years in many different forms, are now difficult to find. This volume gathers together pieces on British and European history from the fifteenth to the early seventeenth centuries, ending with the Thirty Years War, which Trevor-Roper views as the great historical and intellectual watershed that marked the end of the Renaissance.

Covering a wide range of topics, these writings reflect the many facets of Trevor-Roper's interest in intellectual and cultural history. Included are discussions of Renaissance Venice; the arts as patronized by that "universal man," the Emperor Maximilian I; the court of Henry VIII and the ideas of Sir Thomas More; the Lisle Letters and the formidable Cromwellian revolution; the historiography and the historical philosophy of the Elizabethans John Stow and William Camden; religion and the "judicious Hooker," the great doctor of the Anglican Church; medicine and medical philosophy, shaken out of its orthodoxy by Paracelsus and his disciples; literature and Burton's Anatomy of Melancholy; and the ideology of the Renaissance courts.

Trevor-Roper sets his intellectual and cultural history in a context of society and politics: in realization of ideas, the patronage of the arts, the interpretation of history, the social challenge of science, the social application of religion. This volume of essays confirms his reputation as a spectacular writer of history and master essayist.
AUTHOR BIOGRAPHY
Hugh Trevor-Roper (1914-2003) was an English historian of early modern Britain and Nazi Germany and Regius Professor of Modern History at Oxford. He authored many books, but is probably best known for The Last Days of Hitler, published only two years after the end of the war.
TABLE OF CONTENTS


Preface
1. The Doge Francesco Foscari
2. The Emperor Maximilian I, as patron of the arts
3. Sir Thomas More and Utopia
4. Erasmus and the Crisis of Christian Humanism
5. The Lisle Letters
6. John Stow
7. Richard Hooker and the Church of England
8. Queen Elizabeth's first historian: William Camden
9. The Paracelsian Movement
10. The sieur de la Rivière
11. The Culture of the Baroque Courts
12. Robert Burton and The Anatomy of Melancholy
13. The Outbreak of the Thirty Years War
Index