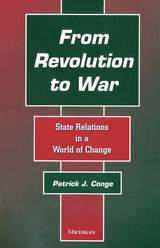 In the history of international relations, few events command as much attention as revolution and war. Over the centuries, revolutionary transformations have produced some of the most ruinous and bloody wars. Nevertheless, the breakdown of peace in time of revolution is poorly understood. Patrick Conge offers a groundbreaking study of the relationship between war and revolution.
How can we best understand the effect of revolutionary transformations on the politics of war and peace? Conge argues that it is only by bringing in, first, the organizational capacity of revolutionary regimes to extract resources and convert them into military strength and, second, the power of transformative ideas to transcend national boundaries and undermine the ability of opposing regimes to compromise that we are best able to understand the effect of revolution on the origins and persistence of war. By incorporating such key elements, this book provides a new, more comprehensive explanation of the relationship between revolution, war, and peace.
Conditions that lead to and sustain wars in general are identified and placed in the light of revolutionary transformations. Once the argument is presented, historical case studies are used to test its plausibility. Conge demonstrates the importance of the effect of revolutionary organization and ideas on the outcome of conflicts.
Political scientists, historians, sociologists, and the general reader interested in the politics of war and peace in revolutionary times are given new perspectives on the relationship between revolution and war as well as on the implications of political organization for military power and the process of consolidation of new regimes.
Patrick J. Conge is Assistant Professor of Political Science, University of Arkansas.
TABLE OF CONTENTS