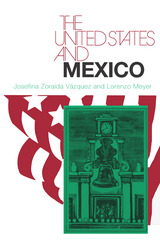 Josefina Zoraida Vazquez and Lorenzo Meyer recreate, from a distinctly Mexican perspective, the dramatic story of how one country's politics, economy, and culture have been influenced by its neighbor. Throughout, the authors emphasize the predominance of the United States, the defensive position of Mexico, and the impact of the United States on internal Mexican developments.
TABLE OF CONTENTS