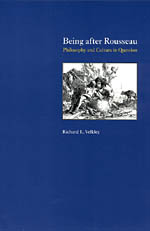 In Being after Rousseau, Richard L. Velkley presents Jean-Jacques Rousseau as the founder of a modern European tradition of reflection on the relation of philosophy to culture—a reflection that calls both into question. Tracing this tradition from Rousseau to Immanuel Kant, Friedrich Schelling, and Martin Heidegger, Velkley shows late modern philosophy as a series of ultimately unsuccessful attempts to resolve the dichotomies between nature and society, culture and civilization, and philosophy and society that Rousseau brought to the fore.

The Rousseauian tradition begins, for Velkley, with Rousseau's criticism of modern political philosophy. Although the German Idealists such as Schelling accepted much of Rousseau's critique, they believed, unlike Rousseau, that human wholeness could be attained at the level of society and history. Heidegger and Nietzsche questioned this claim, but followed both Rousseau and the Idealists in their vision of the philosopher-poet striving to recover an original wholeness that the history of reason has distorted.
AUTHOR BIOGRAPHY
Richard L. Velkley is an associate professor of philosophy at The Catholic University of America. He is the author of Freedom and the End of Reason: On the Moral Foundation of Kant's Critical Philosophy.
TABLE OF CONTENTS


Acknowledgments
Introduction
I. Recalling Origins
1. The Tension in the Beautiful: On Culture and Civilization in Rousseau and German Philosophy
II. The Rift in Being
2. Speech, Imagination, Origins: Rousseau and the Political Animal
3. Freedom, Teleology, and Justification of Reason: On the Philosophical Importance of Kant's Rousseauian Turn
III. Logical Socratism
4. On Kant's Socratism
5. Kant on the Primacy and the Limits of Logic
IV. Poetic Wholeness
6. Moral Finality and the Unity of Homo Sapiens: On Teleology in Kant
7. Realizing Nature in the Self: Schelling on Art and Intellectual Intuition in the System of Transcendental Idealism
V. Being in Retreat
8. The Necessity of Error: Schelling's Autocritique and the History of Philosophy
9. Heidegger's Step behind the Greeks
Notes
Index