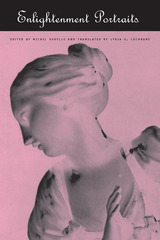 Enlightenment Portraits permits us to see direct actors in history, people who took an active part in the collective adventures that put the human being at the center of Western civilizations vision of the world: nobles, priests, functionaries, men of letters, artists, and explorers, also soldiers and women.

The Enlightenment's leading figures cast their light in an irregular and unequal way: areas and environments in which new ideas penetrated and took effect alternated with shadowy patches. The fundamental structures of society may have remained stable, but new ways of producing, of being, and of appearing made sometimes abrupt headway. Attitudes toward life, birth, love, marriage and sexuality, and death had begun to change.

The twilight of the Enlightenment came at the end of the eighteenth century, part of a sequence of events of which the French Revolutions was simply the paroxysm.

A subtle and complex study of the Enlightenment, this book allows contemporary readers to reflect on how nineteenth- and twentieth-century scholars have constructed their views on eighteenth-century man.
TABLE OF CONTENTS