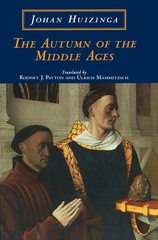 "Here is the first full translation into English of one of the 20th century's few undoubted classics of history." —Washington Post Book World

The Autumn of the Middle Ages is Johan Huizinga's classic portrait of life, thought, and art in fourteenth- and fifteenth-century France and the Netherlands. Few who have read this book in English realize that The Waning of the Middle Ages, the only previous translation, is vastly different from the original Dutch, and incompatible will all other European-language translations.

For Huizinga, the fourteenth- and fifteenth-century marked not the birth of a dramatically new era in history—the Renaissance—but the fullest, ripest phase of medieval life and thought. However, his work was criticized both at home and in Europe for being "old-fashioned" and "too literary" when The Waning of the Middle Ages was first published in 1919. In the 1924 translation, Fritz Hopman adapted, reduced and altered the Dutch edition—softening Huizinga's passionate arguments, dulling his nuances, and eliminating theoretical passages. He dropped many passages Huizinga had quoted in their original old French. Additionally, chapters were rearranged, all references were dropped, and mistranslations were introduced.

This translation corrects such errors, recreating the second Dutch edition which represents Huizinga's thinking at its most important stage. Everything that was dropped or rearranged has been restored. Prose quotations appear in French, with translations preprinted at the bottom of the page, mistranslations have been corrected.

"The advantages of the new translation are so many. . . . It is one of the greatest, as well as one of the most enthralling, historical classics of the twentieth century, and everyone will surely want to read it in the form that was obviously intended by the author." —Francis Haskell, New York Review of Books


Translator's Introduction
Preface to the Dutch Edition
Preface to the German Translation
Ch. 1: The Passionate Intensity of Life
Ch. 2: The Craving for a More Beautiful Life
Ch. 3: The Heroic Dream
Ch. 4: The Forms of Love
Ch. 5: The Vision of Death
Ch. 6: The Depiction of the Sacred
Ch. 7: The Pious Personality
Ch. 8: Religious Excitation and Religious Fantasy
Ch. 9: The Decline of Symbolism
Ch. 10: The Failure of Imagination
Ch. 11: The Forms of Thought in Practice
Ch. 12: Art in Life
Ch. 13: Image and Word
Ch. 14: The Coming of the New Form
Notes
Bibliography
Index