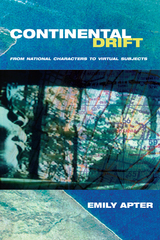 From xenophobic appropriations of Joan of Arc to Afro-futurism and cyberpunk, the "national" characters of the colonial era often seem to be dissolving into postnational and virtual subjects. In Continental Drift, Emily Apter deftly analyzes the French colonial and postcolonial experience as a case study in the erosion of belief in national destiny and the emergence of technologically mediated citizenship.

Among the many topics Apter explores are the fate of national literatures in an increasingly transnational literary climate; the volatile stakes of Albert Camus's life and reputation against the backdrop of Algerian civil strife; the use of literary and theatrical productions to "script" national character for the colonies; belly-dancing and aesthetic theory; and the impact of new media on colonial and postcolonial representation, from tourist photography to the videos of Digital Diaspora.