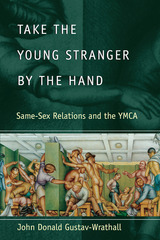 Now associated with family health clubs, the YMCA's bland image is the result of relentless outreach and the studied avoidance of controversy. But, as John Gustav-Wrathall shows in his revealing social history of the organization, the life of the YMCA has been filled with strife, tragedy, and irony, a life that itself reflects the struggle over the shifting societal mores regarding masculine friendship and intimacy. Take the Young Stranger by the Hand presents the YMCA as an institution of profound contradictions, reflective of society's views of same-sex love and sexuality.

"Gustav-Wrathall's book offers an in-depth history of the origins and purposes of the Young Men's Christian Association and how it evolved into—and out of—a gay playland."—Arnie Kantrowitz, Lambda Book Report

"The book's absorbing exploration of the sometimes schismatic, sometimes synergistic relationship between spirituality and sexuality is a fascinating addition to the growing body of social history."—Jim Van Buskirk, San Francisco Bay Guardian
TABLE OF CONTENTS