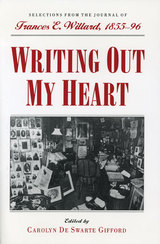 Writing Out My Heart: Selections from the Journal of Frances E. Willard, 1855-96
edited by Carolyn Gifford
University of Illinois Press, 1995
Cloth: 978-0-252-02139-8
The journal of Frances E. Willard nineteenth-century America's most renowned and influential
Woman had been hidden away in a cupboard at the National WCTU headquarters,
and its importance eluded Willard's biographers. Writing Out My Heart
publishes for the first time substantial portions of the forty-nine volumes
rediscovered in 1982. They open a window on the remarkable inner life
of this great public figure and cast her in a new light. No other female
political leader of the period left a private record like this.
Best known for her powerful
leadership of the Woman's Christian Temperance Union (WCTU), at that time
the nation's largest organized body of women, Willard was a world-class
reform leader and feminist. How she achieved this stature has been
documented. This compelling journal reveals why.
Written during her teens,
twenties, and fifties, the journal documents the creation of Frances Willard's
self. At the same time, it often reads like a good novel. It stands
as one of the most explicit and painful records in the nineteenth century
of one woman's coming to terms with her love for women in a heterosexual
world.
Other sections reveal what
impelled Willard to reform the nature and depth of the religious
dimension of her life a dimension not yet adequately explored by
any biographer. Here we see her growing commitment to the "cause
of woman."
The volumes written in her
late middle age give insight into the years when, world famous, she was
part of the transatlantic network of reform, battling ill health, dealing
with controversy in the WCTU, and grieving for her mother, a lifelong
figure of emotional support. This finale concludes one of the most fascinating
of the journal's themes: the nineteenth-century confrontation with sickness
and death.
Drawn from one of the richest
sources in documentary history, knowledgeably introduced and annotated,
Writing Out My Heart is a biographical goldmine, rich in the themes
and institutions central to women's lives in nineteenth-century America.

AUTHOR BIOGRAPHY
Carolyn De Swarte Gifford, an associate editor of the Historical Encyclopedia of Chicago Women, has published extensively on the history of American women.