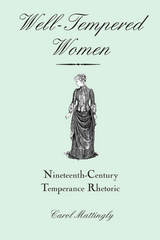 In this richly illustrated study, Carol Mattingly examines the rhetoric of the temperance movement, the largest political movement of women in the nineteenth century.

Tapping previously unexplored sources, Mattingly uncovers new voices and different perspectives, thus greatly expanding our knowledge of temperance women in particular and of nineteenth-century women and women's rhetoric in general. Her scope is broad: she looks at temperance fiction, newspaper accounts of meetings and speeches, autobiographical and biographical accounts, and minutes of national and state temperance meetings.

The women's temperance movement was first and foremost an effort by women to improve the lives of women. Twentieth-centuty scholars often dismiss temperance women as conservative and complicit in their own oppression. As Mattingly demonstrate, however, the opposite is true: temperance women made purposeful rhetorical choices in their efforts to improve the lives of women. They carefully considered the life circumstances of all women and sought to raise consciousness and achieve reform in an effective manner. And they were effective, gaining legal, political, and social improvements for women as they became the most influential and most successful group of women reformers in the nineteenth and early twentieth centuries.

Mattingly finds that, for a large number of women who were unhappy with their status in the nineteenth century, the temperance movement provided an avenue for change. Examining the choices these women made in their efforts to better conditions for women, Mattingly looks first at oral rhetoric among nineteenth-century temperance women. She examines the early temperance speeches of activists like Susan B. Anthony and Elizabeth Cady Stanton, who later chose to concentrate their effort in the suffrage organizations, and those who continued to work on behalf of women primarily through the temperance topic, such as Amelia Bloomer and Clarina Howard Nichols. Finally, she examines the rhetoric of members of the Woman’ s Christian Temperance Union— the largest organization of women in the nineteenth century.

Mattingly then turns to the rhetoric from perspectives outside those of mainstream, middle-class women. She focuses on racial conflicts and alliances as an increasingly diverse membership threatened the unity and harmony in the WCTU. Her primary source for this discussion is contemporary newspaper accounts of temperance speeches.

Fiction by temperance writers also proves to be a fertile source for Mattingly's investigation. Insisting on greater equality between men and women, this fiction candidly portrayed injustice toward women. Through the temperance issue, Mattingly discovers, women could broach otherwise clandestine topics openly. She also finds that many of the concerns of nineteenth-century temperance women are remarkably similar to concerns of today’ s feminists.

AUTHOR BIOGRAPHY
Carol Mattingly is director of the Writing Center at the University of Louisville.
TABLE OF CONTENTS
Cover
Title Page
Copyright
Contents
Plates List
Acknowledgments
Chronology
Introduction: Silenced Voices
Part One: From Pedestal to Pen and Podium
1. Woman’s Rights in Woman’s Wrongs: Temperance Women at Mid-Century
2. Patriotic Reformers: “Called by the Spirit of the Lord to Lead the Women of the World”
3. Woman-Tempered Rhetoric: Public Presentation and the WCTU
Gallery of Illustrations
Part Two: Controversy Surrounding the Cause
4. Dissension and Division: Racial Tension and the WCTU
5. Red-Nosed Angels and the Corseted Crusade: Newspaper Accounts of Nineteenth-Century Temperance Reformers
Part Three: Fictional Accounts of Feminine Concerns
6. “The Feelings of the Romantic and Fashionable”: Women’s Issues in Temperance Fiction
7. “Wine Drinkers and Heartless Profligates”: Water Drops from Popular Novelists
Conclusion: Women of the Century
Notes
Works Cited
Index
Author Biography
Back Cover